Study protein folding and conformational dynamics at the nanoscale

In this experiment, a protein is tethered between two optically trapped beads. The folding and unfolding of the protein is controlled by moving the beads while the force and distance are measured simultaneously.

The resulting force-distance curve (Figure 1) of calmodulin – a calcium-binding protein – reveals that the protein unfolds and refolds in two steps which correspond to two separate helix-loop-helix domains. By simultaneously observing the FRET fluorescence signal, it can be seen how the unfolding of the domains results in fluctuations of the FRET signal due to changes in the relative position of the FRET pair.

Equilibrium dynamics showing the transition between short-lived intermediate states can be studied because of the intrinsic distance clamp which keeps the traps at a fixed distance, while force fluctuations are measured. When this is applied to calmodulin, the equilibrium fluctuations between the states can be observed with a force resolution of <0.1 pN at 100 Hz. Figure 2 shows that calmodulin switches between two major states, without a clear preference and that intermediate steps can be resolved as calmodulin occasionally jumps to a third state for short periods of time, represented by the dashed grey lines. 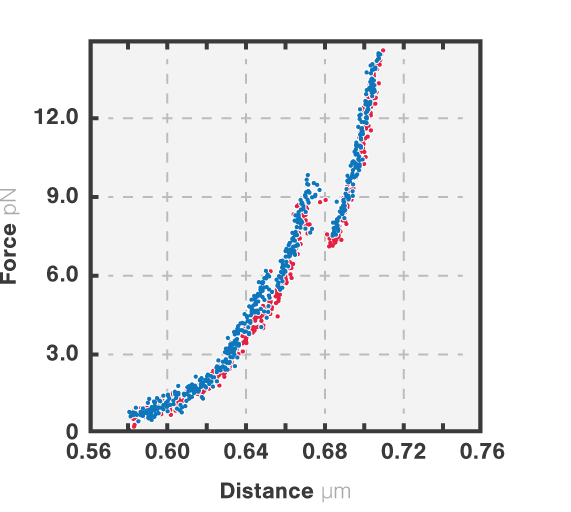