Evaluate the avidity of T cells engaged by bispecific antibodies

Evaluate the avidity of T cells engaged by bispecific antibodies

Bispecific antibodies are power tools adopted by immuno-oncology that can enhance the recruitment of T cells to specific cancer cells. They facilitate the formation of the immunological synapses, which is key for a proper T-cell response against target cancer cells. The z-Movi, specialized in cellular interface analysis, expands the set of parameters to select the best antibodies for optimal T cell responses.

Comparing cell avidity in the presence or absence of bispecific antibodies

T cells with BsAb required stronger pulling forces to detach from the tumor cells when compared with the two controls. A higher proportion of bound T cells is shown in the presence of target specific BsAb (Figure 1).

Cell avidity is a novel parameter to determine the binding strength of specific vs non-specific antibody engaged T cells to the target cells. Future cell avidity analyses of engineered BsAb will enable researchers to discover and fine-tune optimal antibodies for T cell therapies. 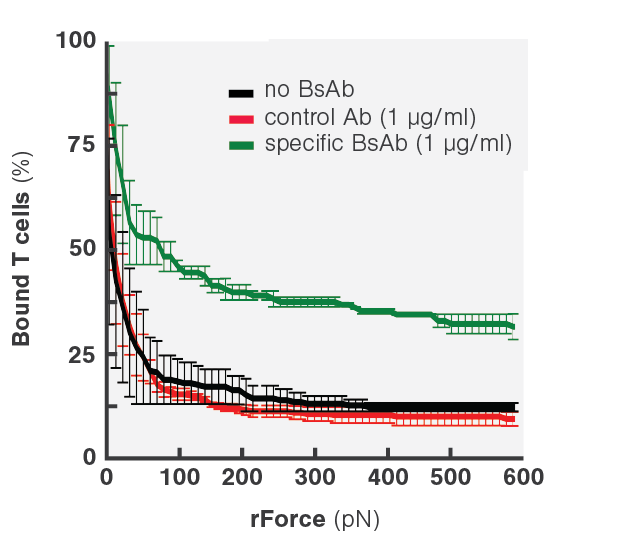 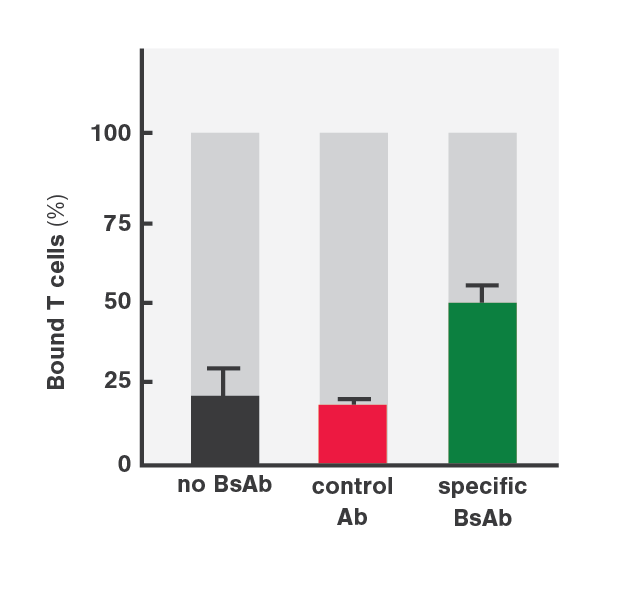 In another collaborative study, we evaluated the cell avidities between T cells and target cancer cells, whereas the T cells were pre-incubated with bispecific antibodies (BsAbs) in 3 different concentrations and compared to 2 control populations (no BsAb or non-T-cell binding BsAb). Each different T-cell population was incubated in the z-Movi Chip for 5 minutes with seeded target cells, after which a linear force ramp was applied from 0-1000 pN for 2:30 minutes. After each run, the T-cell population was flushed out and the next one was flushed into the chip for the next measurement.

The results show that cell avidity directly correlates with the concentration of BsAbs. Increasing BsAb concentration proportionally correlated with increased avidity, with maximum avidity reached at a concentration of 1µg/mL (Figure 2). Further analysis (data not shown) also showed that T-cell avidity increases in the presence of BsAbs in an antigen-dependent fashion and that the results are in agreement with cytotoxicity data obtained through killing assays.)

This experiment demonstrates that the z-Movi is capable of indicating T cell functionality in the presence of BsAbs at specific concentrations. Cell avidity helps researchers to understand more about the cellular interaction and further optimize T cell therapy to achieve optimal efficacy. 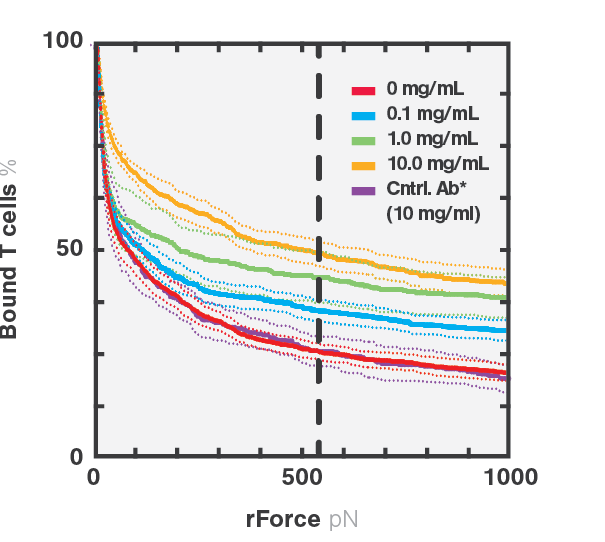 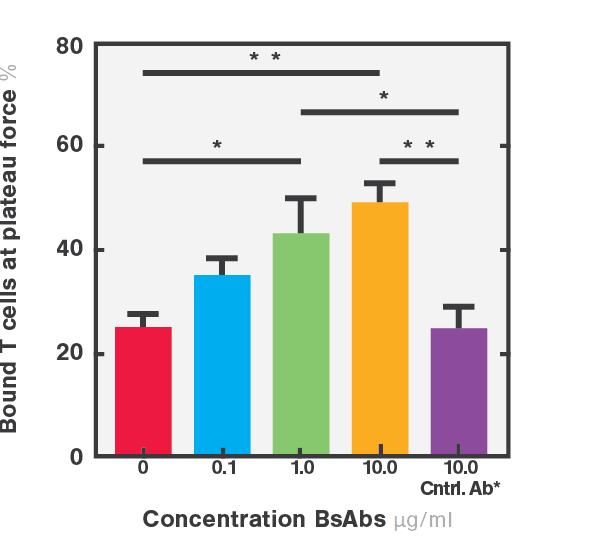 2 Left: Avidity curve representing the proportion of target-bound T cells (pre-incubated with BsAb at specific concentration or control conditions) upon application of a force ramp. The dotted line shows the plateau force, which is determined as the force at which the negative control reached a plateau (deviating less than 2% in the next 100 pN), and is an indicator of non-specific binding. Right: The proportion of target-bound T cells after applying corrections to eliminate non-specific binding. (rForce indicates relative force). *Cntrl. Ab binds to the target cells but does not bind the T cells. 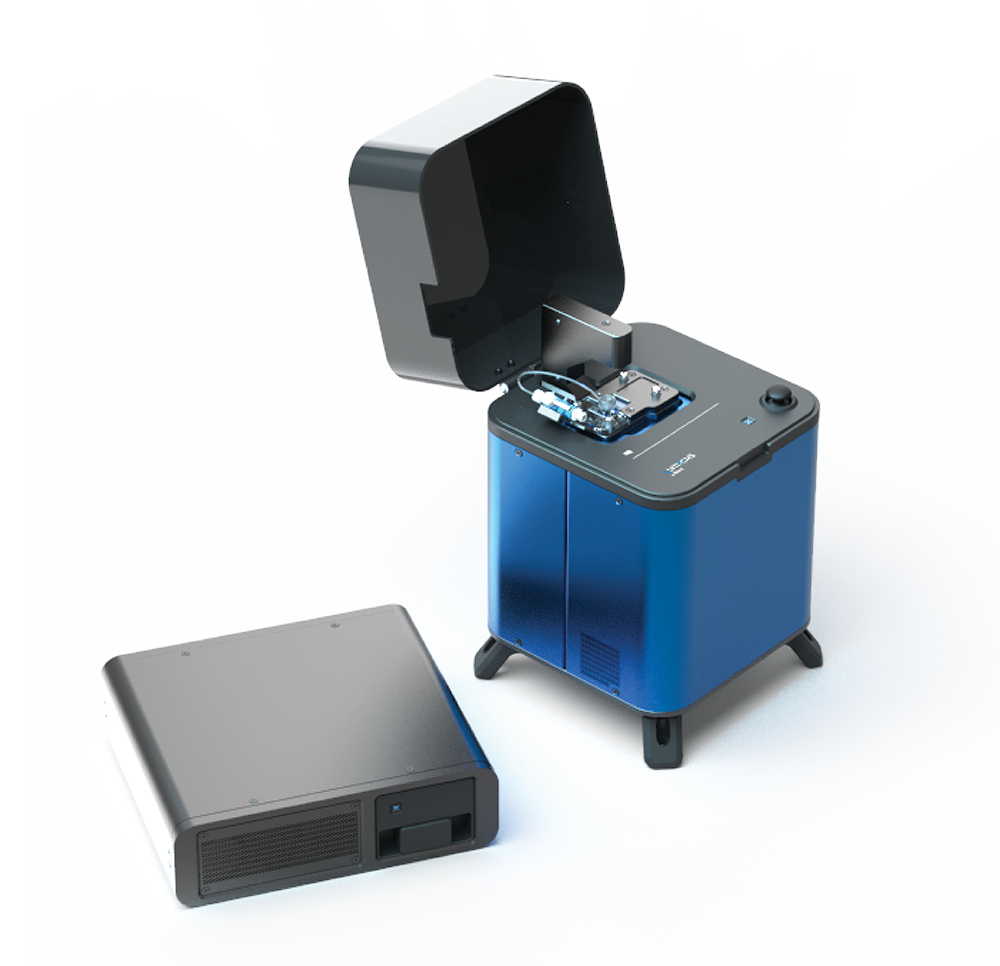 The z-Movi® is a unique instrument that measures the avidity between immune cells and their targets, enabling you to identify the most potent immunotherapeutic effector cells. This new technology provides you with predictive, reproducible, and fast high-throughput results at a single-cell resolution without compromising cell viability. All within a compact little box that easily fits inside the flow hood for sterile and safe sample handling